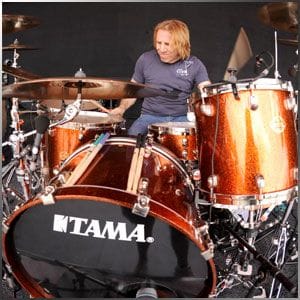 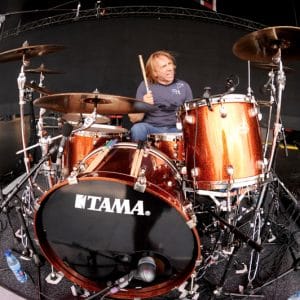 Music and the decades they came from can, for the most part, be categorized. In the 70’s you had disco, bell bottoms and flower power. In the 80’s you had arena rock, spandex costumes, and big hair. In the 90’s you had grunge, flannel, and anti-rock stars. Obviously there will always be exceptions, and the band TESLA is definitely an exception. They came from the 80’s, yet they lacked the spandex and aqua net. They are the working man’s band, with lyrics that were relatable and songs that are memorable. Currently out on the road supporting their current release Reel To Reel, drummer Troy Luccketta talks with Wisconsin Music about his life, his faith, and his music:

Wisconsin Music: How have the shows been so far on this tour?

Troy Luccketta: The shows have been good! There’s a good buzz on the record, which is nice. Now we’re just out here working it. We just got back from Europe. Did a few dates out there, and we’re gonna go back again. So it seems like we’re off to a pretty good start.

WM: How is the response different in Europe compared to the states?

TL: I really don’t know if it’s fair to judge, because we haven’t been over there in 15 years. The response was great. The audiences over there were pretty crazy and loud! Audiences here are great and really into it too, but it seems like something was definitely happening over there. Looks like we’re going to open those markets back up.

WM: How did you get started in music?

TL: It goes back to my childhood. My mom records, my dad’s records, my brothers and sisters records… which helped me realized I wanted to play drums. Then I walked into this friend of mine’s house one day, and he had a snare drum there. They didn’t have any sticks, and I remember us just standing around looking at it. There were about 3 of us, and they knew I wanted to play. I just grabbed some spoons and I played Wipeout. It’s funny, because I can take myself right back to that moment where it all started. At that point I didn’t have drums and I didn’t have a lot of money. So I started working a paper route and started saving my money to buy my first set of drums. I think it was 6th grade at a talent show where me

and a friend of mine played a couple of songs. Then I started getting into cover bands. I was in a band when I was 15, and everyone was older… early 20’s. My first record was in 1982 with Eric Martin, the singer from Mr. Big. And I’ve been doing it ever since.

WM: So how did you hook up with TESLA?

TL: The Eric Martin band was breaking up, and they (TESLA) were looking for a drummer. They were called City Kid at the time, and there was producer by the name of Dwayne Hitchens who was working with them. So he came over and played me a couple of songs. I heard Jeff’s voice and thought it was interesting. He definitely had something different going on. I went down to this club called the Oasis Ballroom a few nights in a row to check them out. Once I started watching Jeff, I was sold. That’s really what made the decision for me, because he kept my attention the whole night.

WM: Was there ever any discussion back then to conform to the look of other rock bands in that era?

TL: Only with the record company when we did the first video. It was never something that was consciously addressed. We were just playing music. So when you do videos, they have budgets and they bring in their wardrobe people. They wheeled in all these clothes. And all the clothes on these racks were spandex. (laughs) Serious, this is a true story! There were just racks and racks full of spandex clothes. And we were just looking and chuckling at each other.

TL: (more laughs) Yeah, you can tell they got to us a little bit with the hair spray. A little puffy hair and a little eye-liner. That was their doing, it wasn’t ours. But jumping into spandex wasn’t gonna happen!

WM: So tell us about the new album Reel To Reel.

TL: Um… yep. Thanks for the update. (laughs) There’s 25 songs total. One disc you actually buy in the stores, and there’s another disc with 12 songs on it that you get when you buy a ticket to a show. We didn’t plan on recording that many songs, it’s just something that happened. We wanted live solos, playing together in a room, to 2 inch tape with no Pro-tools. Keeping it honest and just having some fun! While we were doing that in the first week we had 10 songs done. Three weeks later we had 25 songs done. It was really only supposed to be one disc. From my understanding, I think we’re going to do a full release of both discs in October. That’s because we’re going to be playing in cities that some people can’t get to, so they might not be able to get the second cd. We also started our own label; TESLA Electric Recordings…

WM: Do you see future releases being on your new label?

TL: Yeah, we’re gonna do a new studio album and put it out on there. I mean, for a band like us… we don’t know if we’ll ever be back to selling millions of records. And unless we are, there’s really no way to fully go after those markets. It makes more sense financially to put them out ourselves. At least we’ll be in control of where the money’s being spent, and how we’re spending it.

WM: Who came up with the concept of the CD and the packaging for Reel To Reel?

TL: This is what I remember: When we started discussing the recording being in analog, I suggested we shoot a picture of a two inch tape machine. The rewind button would be lit up on it, and the album would be called ‘Rewind’ because all these songs are from the 70’s. Our manager at the time, Tom Zutaut, spearheaded a lot of great ideas and worked really hard. He put a lot of the concepts together, and just took the ball and ran with it.

WM: The sound on Reel To Reel is back to the classic TESLA sound where the previous release Into The Now was more modern in sound and recording process. What direction do you see the next studio album taking?

TL: I think it will be a hybrid of embracing both technologies. But who knows, maybe we’ll stick to recording analog.

WM: I think it sounds great. It comes off very raw, which suits the material you’re playing.

TL: It really does. It’s got a great energy and vibe to it. It just seems like everything lined up on this recording. I really feel like we hit a home run with it. It wasn’t over thought, and everything was recorded in a couple of takes. With the packaging, the concept, and the sound… everything just fell into place.

WM: Not only is this the first release on your own label, it’s also your first release without the original line-up. In the past guitar player Tommy Skeoch has taken time off from the band. Is this temporary or permanent this time?

TL: Yes, it’s permanent. That’s what was really cool about doing this cover album. It took the pressure off, and we were able to go in and enjoy ourselves. There’s definitely a vibe with our new guy Dave. We haven’t done any writing with him yet, but based on what we’ve done with him so far it’s been nice. It’s been very effortless and non-pretentious.

WM: In doing the research for this interview, I’ve discovered you’re a man of faith. How does that come into play as the drummer in TESLA?

TL: Well, my faith is very strong. I’m a full blown Christian. I love the Lord, and I get it. That’s my thing. I’m not standing out on a street corner (witnessing), but I don’t worry about who I offend with it either. It’s attraction, not promotion. I have my own set of morals and ethics that I live by, but that doesn’t mean that it’s the same as yours. But am I gonna be in a band that’s trashy and do a bunch of trashy things? No, I’m not. Can I go play on somebody’s record that might not share the same values and maybe their coming from a different angle? Depends on what it is. If it crosses the line? Then no. That’s something that I usually work out with myself, maybe through prayer. But as far as TESLA goes, it all fits. Today there’s no drugs or alcohol in this group. That’s not from me, that came from them. I would have never thrown that on them. But I’ve been clean and sober for 14 years. I’m just doing my life, I’m not doing their life. It’s tough enough to keep my own life in check. But my faith definitely effects my decisions and how I live.

I just finished working on my first Christian album for Brandon Reid Allen. It’s kind of like a Mellencamp type record, but mainstream Christian. If I play on someone’s record or if I do something, that’s fine. But TESLA is truly where my heart is.

WM: The organization that you started, Wake Up To Love, has had a very positive effect on the lives of so many people. A couple of years ago you put on a benefit concert for the Station Family Fund. Are there any future plans with Wake Up To Love?

TL: It’s funny you mention it, I just talked to them a couple of days ago. We’re gonna do another Station Family Fund show again this February. Your site can be the first to announce that. It’ll be interesting to see what comes from it. But TESLA will be on the bill again.

WM: What’s next for TESLA after the tour?

TL: We’re got a box set that’s going to be coming out. It’ll have early demos and recordings, like Little Suzi with Ronnie Montrose producing. We were trying to release it December of this year, but I can tell you it’s not gonna happen until next year. We’re reviewing so much stuff. There’s a ton of it, so we just have to figure out how we’re going to put it all together.

WM: Any message to your fans in Wisconsin?