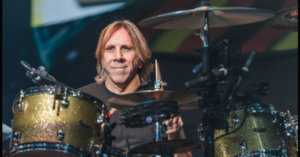 Tesla is in the midst of a tour with Def Leppard, and at a recent concert in Mansfield, MA, we sat down with drummer Troy Luccketta to catch up on all things Tesla.

You’re in the middle of a big tour with Def Leppard; and have toured with them for almost 30 years.  How did this    tour come about, anything new and different this time around?

How it came about was, we simply found out we had an offer to go out with them.  I don’t think it has to do with friendships – because that don’t work in business.  It’s not like, “Hey – we love you guys, come on out with us!”  There might have been some of that.  But on the business level – we’ve been sustaining ourselves out there playing, and maybe it was just enough to get us to break.  And though it’s not as new for us, ‘cause we’ve been there and done that, but we do get to rekindle old relationships.

One thing that’s really exciting is that [Def Leppard’s own] Phil Collen is now in the middle of producing our new record.  In fact, I just tracked drums with him last week – 9 songs, in Sacramento.

Phil producing your album – how did that come about? How are you guys approaching the album?

So Phil kinda jumped in, likes the band, and thought, “Wow, what a great rock and roll band!” and you guys need to do this, this and that.  Some of those things he said were really forward and straight to the point: “You guys need to dress better; You need to lose some weight; And you need to be a rock and roll band, like you were 30 years ago.” Play the part, look the part, do the part.  We are doing that – we’re juicing, eating well, making the changes.

On a phone conference with Phil and all of us, he said he would be up for producing the whole record if we would take care of business and get it done.  He would give it 150%, and we would give it 150%. And the band started writing before we came out on this tour.

We have a mobile studio set up, they’re working next door right now, started tracking getting all the songs ready, gridded out on the ProTools grid, so I can go play drums to everything.  Brian’s got a studio, so I record the drums there.  But out here on the road, we’re building the body so to speak, getting the arrangement worked out, this is the pre-production phase.  We are 9 tracks into it.

Phil plays on some of it, and co-writing – pulling a “Mutt” Lange, like Mutt did with Def Leppard.  He’s a junior Mutt!  Applying very much the Mutt mentality – all about the song, no wasted parts, no wasted frills, lots of hooks.  This is a collaboration – one very highly influenced by Phil.  His stamp is all over it.

For the last album [Simplicity], we just kinda got together, jumped in the studio, went in, wrote and put that whole thing together in a few months.

This record here, entirely different process – taking our time with Phil every day, while he goes in and works with the band, and he’s getting the guys to come in and put their parts down, and he’s putting parts down too.

You also have another album coming out – Mechanical Resonance Live.  What was the motivation for the album?

Yes – we have a new record getting ready to come out, which is a live Mechanical Resonance – the whole record – that we recorded last year, on the tour over a couple of weeks, which was suggested by Phil to do this.

You played drums – and recently toured with – a reunited Whitford/St.Holmes.  How did that collaboration come about?

I play in Classic Rock Allstars band in Nashville.  Derek came in and sat in one night. That put me on Derek’s radar.  He gave me a call, asked me to come down and jam with him and Brad [Whitford] and Chopper [Anderson] the bass player.

So I went down and jammed with them a couple times in the SIR Studios in 3-hr blocks. We did a few jams, and I was leaving that following Wednesday on tour.  I was there on Friday with them, and told Brad that I was going on the road with Tesla for 5 weeks, and he said, “Oh – we need to talk.”  When I got home, I got a call from Derek, he asked me if I can go into the studio on Monday morning, and record with them.  I said, “Well, we don’t really have any songs together” – there were some ideas, some things.  I didn’t know they had as much together as they did.  Because we were mostly jamming, no singing, just scats and idea.

So I went in Monday morning, stayed with them through Tuesday evening, and we recorded that record live – two guitars, bass and drums – all live, just a couple takes, all 4 of us in the studio.  Something I am real proud of, to be affiliated and working with them.  We captured some magic, we really did.

As for the future: Derek has expressed interest in my getting back with them, when my time is available.  So we’ll see how that plays out!

First concert you went to?

First album you bought with your own money?

You know what’s a drag? I don’t even know the answer to that question!  I listened to my mother’s records growing up, then I remember Jimi Hendrix Experience, Black Sabbath’s Paranoid, Creedence Clearwater, all of those records from my brothers and sisters.

First song you learned to play?

Ike and Tina Turner’s Proud Mary was the first song I learned!

Believe it or not, right now, because I don’t watch much TV, The Voice.  My wife and I watch that all the time.  It’s relaxing and something I enjoy.

Musician/band, alive or dead, that you’d love to jam with?

Definitely Paul McCartney.  All around great, beautiful music that’s inspired me. Everything from singer songwriter, to great arrangements – they get pretty deep when you dive in.

Tesla is in the midst of a tour with Def Leppard, and has two albums coming out in 2016 and 2017.  So, catch them live and give the albums a listen!